“ I don’t understand why Betsy keeps missing deadlines. I keep telling her how important they are, and she keeps promising to do it, but things just never seem to change. She’s a great employee in so many other respects, I just don’t get it.”

Does that sound familiar?

Many of us have faced a situation like this at one time or another.

A person reporting to you keeps falling short on the same issue time after time. Maybe it’s meeting deadlines, as with Betsy above. Maybe it’s making too many small mistakes and not paying attention to details.

Whatever the exact nature of the problem, the common elements in these situations seem to be an employee who keeps missing the mark in some area and a boss who keeps giving him or her a second, third, or fourth chance.

As a supervisor, this can be a tremendously frustrating situation.

You want your people to succeed.

So you keep trying to fix the situation.

You try feedback and reminders.

You might sometimes offer lavish praise when you see small progress.

You reinforce the message over and over, to the point of “sounding like a broken record”, as one client told us.

But all to no avail.

The person appears to hear the boss’ feedback, seems to understand the issue, often appears sincere in promising to do better, but the end result is the same: the person slips back consistently into the unproductive behavior.

What’s a boss to do?

Ask yourself a simple question: Am I giving this person too many second chances?

That small voice in each of our heads will probably give you the right answer, but if you’re unsure, think back over the past weeks and months.

Have you had essentially the same conversation with this person several times?

Have you walked away more than once convinced that you have finally conveyed your message?

Have you subsequently become frustrated, confused or even angry when you see your subordinate commit the same error again?

If so, you are probably giving too many second chances.

So what do YOU do about it?

The tough thing about a situation like this is that the person is almost always a valuable employee in other respects.

Let’s face it, if they weren’t, you wouldn’t have devoted as much time as you have to trying to “fix” their behavior. So simply giving up on the person is almost never the first – or best – option.

Instead, take a look at your own behavior and motivations.

If you’ve got a 360 assessment to refer to, or a trusted boss, mentor or coach to talk this over with, you might consult these resources as well.

There are two characteristics that tend to get us in trouble with regard to giving too many second chances. As with almost all personal characteristics, they are, for the most part, positive characteristics and overall very helpful to your success in your career.

But as is also almost always the case, too much of a “good thing” can become a problem.

So here’s what you do:

First, are you someone who is too trusting or positive about other people?

You might ask yourself: “can I be TOO trusting or positive about others”?

If the answer to that is yes, it can tend to make you overestimate a person’s positive qualities or capabilities, and under-estimate their weaknesses.

Sometimes, it may lead you to make excuses for their shortcomings.

For example, have you ever said to yourself something like: “Well, Betsy’s last boss never enforced deadlines, so no wonder, she didn’t really learn how important they are”?

When you are too positive about people, you often let your natural empathy overwhelm your good judgment about their behavior.

Second, are you someone who dislikes confrontational or difficult conversations? 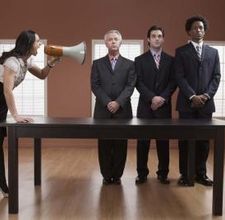 Many of us do.

One result may be that the conversations you’re having with your employee are not as direct as they need to be.

Maybe you pass on your dissatisfaction with their performance in passing or in half-joking comments. Maybe you mutter under your breath as you walk away from their desk. Maybe you say nothing aloud at the office but go home and fume about it to your significant other.

Ask yourself realistically,“Have I been direct and clear about my expectations for Betsy in this area? Have I not only asked her for a commitment to change, but also followed up to make sure that she did?

If she falls backward, have I pointed it out in the moment, rather than delaying or avoiding an uncomfortable conversation?

I’m Guilty Of Giving Too Many Second Chances…Now What?

If you think you may be giving too many second chances, consider doing the following:

Consistency is the key here.

Rather than always giving someone another chance, be consistent in insisting that they deliver on their commitments, and then praise them for it.

You’ll probably find that in the end, this will give you more second chances to praise them in the future, instead of giving them second chances for failing to deliver on their commitments.

In this leadership moments video, I will be addressing the dilemma that many CEO’s, managers or other leaders face from time to time: terminating an employee. END_OF_DOCUMENT_TOKEN_TO_BE_REPLACED